Ladies and gentlemen, it's with great pleasure and excitement that I announce the release of my newest book, FEELING THE RHYTHM!

It's currently available at MLR Press in all ebook formats: http://www.mlrbooks.com/ShowBook.php?book=SJF_RTHM

The print edition will be coming soon too, in about 2-3 weeks.

I can't even begin to describe how thrilled I am to have Brad and Remmy's story go live for the world. Their story has been in the works for a long time, and I know many folks have been waiting for it for almost as long. I'm very thankful to everyone who's wanted to read this book, and who have offered me so much encouragement with your excitement about it. Now that the Conquest boys are back, I hope very much that everyone who decides to hang out with them once again will enjoy this new story, and getting to know Brad and Remmy a little better. 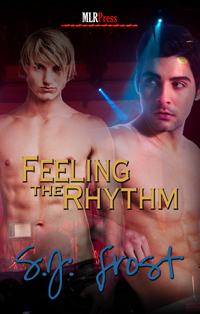 Blurb:
Brad Delfini once had the world in his hands, but misfortunes and bad decisions showed him just how quickly the spotlight can go dark. For years, he was struggling to get by, until a fateful phone call brought him to famed rock band, Conquest. Since becoming their drummer, he’s hit the top of fame again, and he has all he could ever want. Except for one thing. As Conquest’s world tour draws to a close, that missed chance leaves him filled with regrets.

Remmy Laurent has been a roadie since he graduated high school, but years of being on the move have worn him down. He decides it’s time to quit and bring some stability into his life. He just wanted to finish out this one last tour with his favorite band; Conquest. It hasn’t been an easy tour, for many reasons, but most of all because no matter how hard he tried to deny it, he lost his heart to a man who he thinks barely knows he exists.

When the last concert is played, Brad and Remmy both believe they’ll never see each other again, but a little friendly intervention brings them together once more. As they begin to know each other in a whole new way, Brad must somehow make peace with his past if he and Remmy are going to have a future.
Posted by S.J. Frost at 9:56 AM
Email ThisBlogThis!Share to TwitterShare to FacebookShare to Pinterest
Labels: brad delfini, conquest series, feeling the rhythm, MLR Press, remmy laurent, sj frost