Now that's what every book lover likes to hear! I know I do! Especially when they're FREE BOOKS by some incredibly talented authors and at an awesome publishing house. Starting December 13th, MLR Press is offering a book for free download through the 24th in celebration of the holidays and to give a little back to all the readers who give their support all year long.

Check out all these great books and authors! 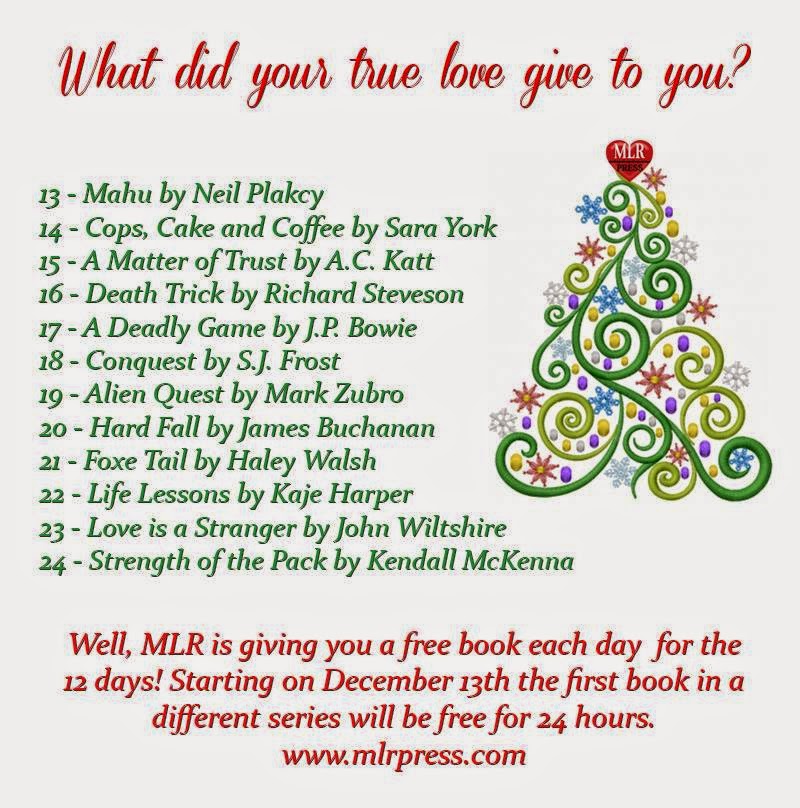 About Those Ellora's Cave Titles

In my last blog post about my new website layout, I said I put my Ellora's Cave books back on my website and I'd get around to explaining why soon. I do apologize that's taken me so long. Life keeps moving faster and faster, I swear.

With me putting the titles back on my website, and eventually I'll get them up here again too, I'm afraid it does not mean all is well between me and Ellora's Cave. They've issued two payments to me and as of this moment that I'm writing this, they've paid me up through June. So on that front, there's been a small bit of improvement. Not much, though. They're still behind in payment. When/if any checks do arrive, I count it more of a surprise than having any expectation of getting paid regularly. So money isn't why I put those titles back up again. What's more important to me is I don't want my actions to have a harmful effect on anyone else.

When you're with a publishing house, you're connected to the other authors, even if you don't know them personally, or may have never spoken to some of them. At least, that's how I view it. I'm not saying to buy Ellora's Cave titles. I'm not saying to not buy them. That's a personal decision that each person has a right to make on their own. For me personally, what it basically breaks down to is I don't want my negative experiences to have repercussions against anyone else. Granted I'm not alone in my negative experiences, after all, I'm not getting paid regularly either, but I'm just trying to make sure I'm not harming anyone else as I'm dealing with the negativity. Enough people have already been harmed.

It also hit me when we had the last Reader Appreciation Day at the Sweet Spot, that if I do a giveaway offering a title from my backlist, and someone goes to my website to see the books I've written, if those books aren't up there, then they may not know they can select them for a prize. I'm okay with giving the books away as a prize ;-)

And there's also the fact that payment aside, the editing (or lack thereof in regards to line editing and proofing supplied by Ellora's Cave) aside, I'm proud of the actual stories themselves. I love my guys in those stories. And I worked damn hard to write those books, so whether I'm getting paid or not, they're still my work. Even if Ellora's Cave won't give me my rights back, they're still MY books.

Now, do my reasons make sense? I honestly have no idea, but there's not a lot about the whole Ellora's Cave situation that does. All I know is, I'm still hoping for the best with all the authors, editors, reviewers, and readers who've gotten tangled in this.