I've just caught my breath from the release of Demon Duke, Paranormal Nobles Book 2, and now here I am again with more release news! I'm happy to announce that the re-release of Model Love will be July 8th at MLR Press. Yay!

There haven't been many changes in the story, but it's been revised and it's in for a round of fresh editing right now. This one will be the last of my re-release titles. I'm still so grateful to MLR Press for picking up the books and giving them a wonderful new home. And happy to get them back out for everyone to read again! With this book being the last re-release, my releases will probably slow down a bit.

I gotta say, I'm in love with the new cover for Model Love. It was made by Lex Valentine, fellow author and wonderful cover artist of Winterheart Design. Lex has made many covers for me, including all the Instincts covers, the covers for Black Heart Down, Heartstrings, and Feeling the Rhythm. I send out my thanks to her for another of her beautiful covers!

And now I'm thrilled to re-introduce (and introduce for the very first time) Ian and Temaru to everyone! 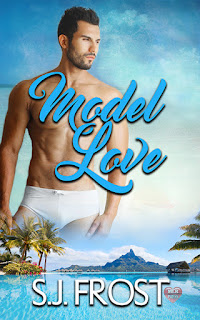 Ian Eldridge has lived a gray existence, his spirit chained by grief and guilt since the death of his twin brother, Aiden. He’d once been one of the most sought after models in the world of high fashion, but when he lost Aiden, he lost everything, including his confidence. On an invitation from his former agent, Ian travels to Bora Bora, hoping to leave his darkness behind, if only for a short while.

Temaru Marceau is a skilled scuba diver on the island and owns a diving shop. The moment he sees Ian, he’s captivated. He can sense Ian needs something…someone, to help him, and he wants to be that man.