As promised in my previous post, I said when I received the lovely new cover for Kissing Cody Starr, I would share it and the blurb, and here I am! I absolutely love the new cover for the book! It was designed by Jared Rackler, who also made the covers two of my other books, To the Other Side and A Little Bit Country. I'm thrilled to have another cover by him, and my gratitude goes out to him for putting his skills to work on this one.

Kissing Cody Starr will re-release from MLR Press on April 1st...right around the corner!

And now, I'm happy to present, the new cover art and blurb for Kissing Cody Starr! 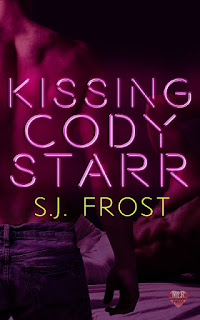 Cody Starr is one of the most popular actors in gay adult films. Young, beautiful, charismatic, when he’s on screen, he shines. But Cody Starr is a stage name, a persona, and the real man, Christian Larson, isn’t as enthusiastic about his adult career anymore. The problem is, Christian fears if he stops being Cody, he could end up homeless…again. He came to Hollywood with big dreams and lost them all, even the one of finding someone to love him.

Finn Madigan is an Army veteran who has a warrior’s soul and a hero’s heart. He makes his living protecting people. When he meets Christian, he sees a young man who needs someone who can be there for him. He’s hesitant to begin an intimate relationship with Christian, but at the same time, he’s helpless to resist him.