Wow! It's been forever since I've posted! I'm very sorry about that. But as always, when I'm quiet it usually means I'm working hard. These past couple of months, it's been working hard on writing and at the day job, both of which have left me with little Internet time. I thought it would be good to take a small break, though, and share some inspiration for the manuscript I'm currently working on, Book 2 in the Terra series.

This story is tentatively titled KNIGHT OF FIRE and I've been writing it for...well, a long time. Pretty much since TO THE OTHER SIDE, Book 1 in the Terra series, was released. Writing life and personal life has caused for some delays with it, but it's getting closer to being put in my editor's hands!

Sadly, I don't have links or artist/photographer credits for these images, but if anyone does know the artists and photographers, I'll absolutely post their information. Some of you may remember my post on Bryson and Garrett where I showed these two pics of how I envision them:


Now I thought I'd share some more images that make me think of some of Terra's other residents.

With this image, I about died when I saw it after TO THE OTHER SIDE was released. It looks so much like how I envision Torran! The dragon here doesn't look anything like Torran's little dragon companion, Rose. She has scales of ruby red, a white underbelly, and rainbow feathered wings.


If you've read TO THE OTHER SIDE, you know I describe Lark as having hair so black, it has a bluish sheen in the light. While in this image, the young man's hair is all blue and his lip is pierced, something that Lark doesn't have, for some reason, this image makes me think of him. Maybe it's the spirit of the image more than being a physical fit. Though, he's certainly beautiful enough to be Lark. 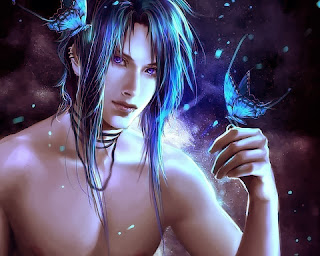 And there you go! A few visuals to go along with the Terra series from my personal Inspiration File :-) Hope you've all enjoyed them. And now that I've shared these, I'm ready to head back to Terra and keep working on getting Book 2 ready for everyone to read!
Posted by S.J. Frost at 6:07 PM
Email ThisBlogThis!Share to TwitterShare to FacebookShare to Pinterest
Labels: knight of fire, Terra Book 1, Terra Book 2, Terra series, To The Other Side